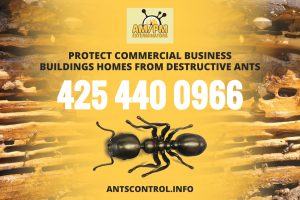 What are the big black huge, large house carpenter ants?
carpenter ants don’t spread disease, they can be a considerable nuisance and can cause damage to your home. Often confused with termites, carpenter ants do not eat wood, but they do tunnel through it to build nests. They can be difficult to locate and require professional treatment because of the damage they can cause to wood elements and foam insulation in your home.

How to identify and get rid of carpenter ants?
Carpenter ants average about 3/8 inch in length but can range from about 1/4 to 1 inch. This makes carpenter ants among the larger species of ants, but size alone is not an indicator, as there are several other types of ants of similar size. You may need to examine an ant closely under a magnifying glass to verify that its identity. The main indicators include a smooth, rounded back and a narrow, pinched waist with a small hump.

How serious are carpenter ants?
carpenter ants will cause serious damage to the structural integrity of your home or commercial business buildings. Even if you think your home is safe because it’s made of brick, you likely have some wooden components that you hadn’t thought about. Support beams, frames, and even foundations are often made of wood that can be destroyed by ants.
Carpenter ants prefer to make their nests in wood that has already experienced some water damage. That’s why it’s important to keep your plumbing up to date and get regular inspections. A small leak can cause wood to rot, which invites pesky ants to make their home there. 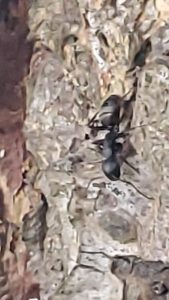 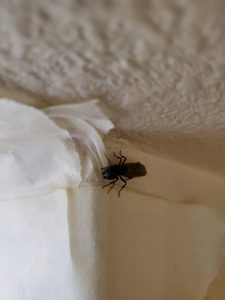 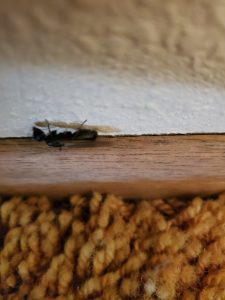 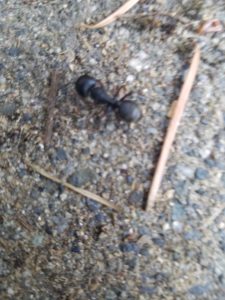 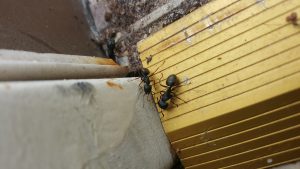 Extermination Exterminators Pest Control for Carpenter Ants: How to Get Rid of Black Carpenter Ants
A eastside pest control company will have access to better equipment and pesticidal products than most homeowners, and they’ll know how to access hidden nests while causing the least possible amount of structural damage to your home. Carpenter ant nests come in two forms: parent nests and satellite nests. The parent nest is where the queen resides. When resources in the parent nest become limited, satellite nests are settled and the colony expands. Nests can be indoors or out, so finding them is the key to getting rid of carpenter ants. These ants follow scented trails to travel back and forth between food and the nests. Carpenter ants extermination trailing behavior to your advantage to find the nests. Since they are most active late at night, place a few drops of honey or jelly on the backside of masking tape each night. When the ants feed on the honey, don’t spray or kill them. Instead, follow them back to their nest. This takes some patience.
Indoors, carpenter ant nests are usually located in areas where there is moisture damaged wood. Prime nesting locations include wall voids, behind dishwashers, near sinks and tubs or other areas with high levels of moisture. Ants often access their nests via baseboards, electrical outlets, door casings or cracks in the walls. If the ants are just foraging in your home and their nest is outside, you will often find colonies in tree stumps, dead or dying trees, and other wood with a lot of moisture damage.
Carpenter ants like to build nests in stacks of wood. where they will excavate the wood and form smooth tunnels inside of the wood. Carpenter ants do not eat wood, they only tunnel and chew through wood to create nests.
Western black carpenter ant colony, when mature, contains about 20-30,000 workers, with large colonies of more than 60,000 individuals. There is usually only one functional, wingless queen per colony. Swarmers are not produced until the colony is more than two years old. They are produced in the previous year and held over the winter in the nest for release the following year. Swarmers appear from May until August in the eastern United States and from February through June in the west.
Keep tree branches and other plants cut back from the house. Sometimes pests use these branches to get into your home.

Buildings of age or type of construction are vulnerable to infestation and damage by carpenter ants. Carpenter ants are very difficult to control. carpenter ants winged individuals often indicate a well-established colony. Sign of carpenter ant activity is the debris they produce from tunneling in the wood. Rough wood shavings mixed with parts of dead ants from the colony indicate carpenter ant nesting activity. Sound sometimes heard as the ants go about their activity in the home’s wood.

Big Black Ants marching and flying in the house problems of pest control:

There is one thing most people don’t think about. That is the home getting infested with a damaging ant species. But the moment came when the big Black Ants have infiltration into the home. Exactly what type of ant or bug is it. Recently, the Greater Seattle area has been plagued with Carpenter Ants. Homes and commercial business owners are great targets for this type of invasion. A Seattle homeowner saw the first big ant in the garage and then on the sundeck. But unsure of what the pests were the owner decided to investigate with taking a picture to submit to a pest control expert. An emailed photo was sent to a professional Pest Control company for verification. All known facts about what had been observed were included in the email. The number one choice was to contact AMPM Exterminators.

The homeowner pulled into the garage. Happy the work day was over and looking forward to getting some rest. But something flew by like a bat out of hell. It came to a stop right at the entry door to the home. The owner was able to capture the bug with a paper towel and took a picture. As soon as the owner entered the house the wife was clearly distraught about big black bugs out on the patio and flying through the open door. One of the kids had forgotten to close the screen door. The husband took a look around inside and outdoors. The Carpenter Ants were working on the patio big time. Annoyed and stressed decision was made to notify a professional pest control company. AMPM Exterminators was sending out a technician shortly.

The nest may be located by careful observations of worker ants, especially between sunset and midnight during spring and summer months when carpenter ants are most active. To follow carpenter ants without startling them, use a flashlight with a red film over the lens—ants cannot see red light. You can also cover part of the flashlight with your hand so the light is more indirect and is not as bright. You can increase your chances of following workers to their nest by setting out food that is attractive to carpenter ants. Place food in areas where you find workers.

Many foods are attractive to carpenter ants, including honey or other sweet foods. During spring, carpenter ants are particularly attracted to protein sources, such as tuna packed in water. (Carpenter ants are not attracted to tuna packed in oil.) Set out small pieces of tuna for the ants to take back to their nest. It is easier to follow the ants when they are carrying food. With patience and perseverance, you can follow the ants back to their nest. If you put pieces of fish in many areas, food placed closer to the nest or trails will be found sooner.

It is not the norm to be able to identify species of bugs much less all ants species. The Queen Carpenter ants measure about 3/4 inch are large and Workers around 1/4-1/2 inch. Winged Carpenter are the aces and are always in flight to establish new colonies. Different colored carpenter ants found in the State of Washington. Some of which are red or black. However, the most common Carpenter Ant is black with reddish legs. Carpenter ants actually do not eat wood. The pests gnaw on wood like a planer smoothing out wood. The Big Black ants can enlarge nests by tunneling into the wood. The scary thing is that the infestation may be more widespread throughout the structure than realized.

Get Rid Of Carpenter Ants – Do It Yourself Pest Control being destructive:

A Carpenter Ant infestation is something a homeowners dreads. The pests create a lot of damage to structures simply through the nesting process. The pests complex life cycle and nesting habits are big threats to residences and commercial businesses. Mutual feelings were shared by the homeowners that the big black ants had to go. How to get rid of the Carpenter Ants was put into the hands of experience. It was perfect time to contact a Pest Control Exterminator.

An assessment would be done to locate where the Carpenter Ants were nesting. A pest control work plan would be drawn up to exterminate the main colony. Main colonies are commonly found outside. But may also be found inside walls, in ceilings, below outdoor siding, in piles of wood by foundations. Also may be found near downspouts, gutters, within floors and insulation. A huge factor are specific trees found near the home. Once the professional carpenter ant infestation expert arrived from AMPM Exterminator the investigation begun. The homeowner was grateful for the expedited service and carefully listened to the prevention tips given by the technician. The homeowner booked a recurring monthly service.

Call AMPM Exterminators for answers to questions about costs and product usage. Yes, Green. It is much easier, faster and cheaper to get rid of any pest by using a professional service. Every home is different and if any repair costs are provided the cost may vary. After years of experienced inspections this client deserved customized solutions for the Big Black Carpenter Ant Infestation. Which AMPM Exterminators did with great success.